Statement of the Women’s Bar Association of the District of Columbia Regarding H.RES. 489

The Women’s Bar Association of the District of Columbia (WBADC) is a champion of tolerance, diversity, and respect for all. We are concerned about the growing atmosphere of fear and hatred in the United States and the increasingly inflammatory rhetoric, which was recently the basis for the U.S. House of Representatives resolution (H. RES. 489), passed on July 16, 2019, by a vote of 240-187. WBADC supports this resolution as an affirmation of the principles and human rights for which we stand.

The resolution opens with compelling statements concerning the founding of our country including: “Whereas the Founders conceived America as a haven of refuge for people fleeing from religious and political persecution, and…[the Founders] all emphasized that the Nation gained as it attracted new people in search of freedom and livelihood for their families…” and “Whereas American patriotism is defined not by race or ethnicity but by devotion to the Constitutional ideals of equality, liberty, inclusion, and democracy and by service to our communities and struggle for the common good…”

The resolution declares that the House “believes that immigrants and their descendants have made America stronger, and that those who take the oath of citizenship are every bit as American as those whose families have lived in the United States for many generations.”

The WBADC was founded by women who fought for (among other rights) the right for all American citizens to vote. Throughout its more than 100-year history, the WBADC has advanced and protected the interests of women and women lawyers, including issues of equality, liberty, inclusion, and democracy, and through its Foundation, serves the legal and related needs of women and girls. As women lawyers and members of the bar, we feel it is important to stand up on behalf of those who are oppressed, discriminated against, or denied access to justice and basic human rights.

In the WBADC’s February 2, 2017 statement regarding the Executive Order Protecting the Nation from Foreign Terrorist Entry into the United States, we declared that, “Immigrants seek out the United States as a place of opportunity, freedom, and most importantly, safety.”

The WBADC has long celebrated those who fulfill their dream of becoming naturalized citizens. Since the early years of the Association, the WBADC has taken part in naturalization ceremonies at the U.S. District Court for the District of Columbia by annually hosting a welcome celebration for new Americans and their families following the ceremony.

The WBADC continues to support efforts that remind all of us of the founding principles upon which our country was established and continues to stand.

Statement of the Women’s Bar Association of the District of Columbia Regarding
Executive Order: Protecting the Nation from Foreign Terrorist Entry into the United States
February 2, 2017

The Trump administration recently issued an Executive Order (“EO”) limiting the admission of both immigrants and nonimmigrants (including visitors, students, and workers) from seven countries with predominately Muslim populations, and of refugees from all countries. This EO has raised significant concern among many groups, including the humanitarian and legal communities. The Women’s Bar Association of the District of Columbia (WBADC) shares many of these concerns.

During the course of its almost 100-year history, the WBADC has worked directly to advance and protect the interests of women lawyers, and through its Foundation, served the legal and related needs of women and girls. Therefore, the WBADC views with grave concern the restrictions set forth in the EO, which may have a severe and significant impact on the well-being and safety of immigrant and refugee women and children.[1]

Immigrants seek out the United States as a place of opportunity, freedom, and most importantly, safety. Through our Foundation’s work with D.C.-based organizations, the WBADC has a first-hand view of the many challenges already facing immigrant women and children. “The two orders dial back years of progress and put women and girls fleeing violence in a very precarious position, one in which many will face being denied safety or protection when they need it most,” said Archi Pyati, Chief of Policy and Programs at Tahirih Justice Center, a past Foundation grant recipient. To the extent the EO as written or enforced puts immigrant and refugee women and children in harm’s way, the WBADC is deeply troubled.

Founded on the principle of promoting the administration of justice, the WBADC holds dear the notions of due process, equal protection under the law, and freedom of religion. The EO raises serious questions regarding these ideals, as highlighted by the actions of the former Acting United States Attorney General, federal judges and state attorneys general across the nation. As an active legal organization committed to ensuring integrity in our profession, we share the concerns expressed by other groups and legal professionals over these recent developments.

The WBADC is heartened that many in our profession have acted in their capacity to express their concerns over this EO, including immediately answering the call to service by forming ad hoc legal clinics at many of the country’s airports. The legal profession is fundamentally about service and advocacy, and we support our colleagues – many of whom are women– who are literally on the ground ensuring that those affected by this EO are afforded the legal counsel and representation to which they are entitled.[2] The WBADC encourages our members who would like to be involved in the many efforts surrounding this EO to seek out other local voluntary professional legal organizations to offer your time and talents, as well as the non-legal community to support these efforts because respect, humane treatment and compassion are nonpartisan qualities that we proudly embrace and protect.

June 2010
WBA supports Solicitor General Elena Kagan, WBA’s 2009 Woman Lawyer of the Year, for the position of Associate Justice of the US Supreme Court. (PDF)

May 2009
WBA urged President Obama to appoint a woman to fill the Supreme Court vacancy that resulted from Justice Souter’s retirement. (PDF)

January 2009
WBA congratulated President Obama on his election (PDF) and urged him to support DC voting representation in Congress and to look to qualified local jurists and attorneys when making appointments to Judges Appointed to the United States Court of Appeals for the District of Columbia Circuit. (PDF)

February 1988
WBA past president Janine Harris gives testimony (PDF) at the ABA Commission on Women in the Profession hearing in Philadelphia, PA. 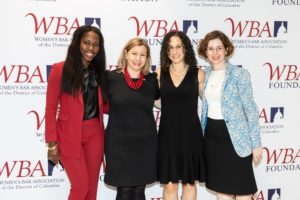 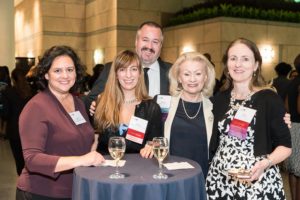