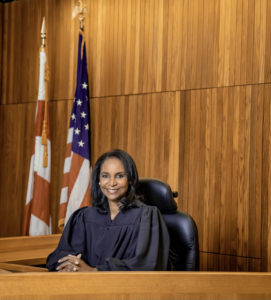 The Woman Lawyer of the Year Award recognizes a leader who has championed change in the profession by leading by example, advocating for justice, and promoting the advancement of women in the profession. A list of previous recipients is available here.

When she was named as Chief Judge in October 2020, she became the first woman to hold the position. Chief Judge Josey-Herring serves as the chief administrative judicial officer for the Superior Court of the District of Columbia, and spokesperson for the Court. She is responsible for dividing the business of the Court, which includes the Family Court, Probate and Tax, Domestic Violence, Criminal, and Civil Divisions. She also designates the Presiding and Deputy Presiding Judges of each Division and makes judicial assignments. As a member of the Joint Committee on Judicial Administration, she sets policy and procedure for the Court and oversees the budget. In addition to her tireless work on the bench, Chief Judge Josey-Herring has been an ardent supporter of others, an active and engaged member of the legal community, and a mentor to many. She is an active member of the Women’s Bar Association – among many other organizations in the community – and has mentored attorneys in the WBA’s Mentor program. She has been a panelist at WBA events, speaking about effective oral advocacy and the impact of gender and race on how women lawyers are perceived (including most recently as part of our events, Where are the Black Women Lawyers in Leadership Positions? and Celebrating Representation: The First Black Woman on the U.S. Supreme Court).

Chief Judge Josey-Herring was first appointed to the bench in November 1997 by President William Clinton. As an Associate Judge, she served in the Family, Civil and Criminal Divisions of the court. In 2000, she was appointed by the Chief Judge to serve as the Deputy Presiding Judge of the Family Court and later served as the Presiding Judge of the Family Court from 2006 through 2008. Chief Judge Josey-Herring worked at the District of Columbia Public Defender Service, first as an attorney from 1988 to 1994, and then as Deputy Director from 1994 to 1997. In that capacity she directly supervised the Investigation Division, the Prisoner Rights Program, Criminal Justice Act Office, the agency’s grant funded programs and coordinated the attorney hiring program. She also monitored the agency’s compliance with Merit Personnel Protection Act policies, investigated personnel complaints, and testified before the District of Columbia Council on budget and other legislative matters.