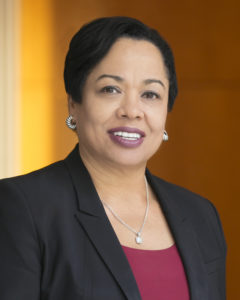 The Women’s Bar Association of the District of Columbia’s 2021 WBA Woman Lawyer of the Year is Grace Speights, a Partner in the Washington, DC office of Morgan, Lewis & Bockius LLP.

The Woman Lawyer of the Year Award recognizes a leader who has championed change in the profession by leading by example, advocating for justice, and promoting the advancement of women in the profession. A list of previous recipients is available here.

Ms. Speights is a powerhouse lawyer who, through her words and actions, embodies the spirit of the WBA. As global chair of Morgan Lewis’s top‐tier labor and employment practice and co‐leader of the firm’s Mobilizing for Equality initiative, she is a focused leader who sees potential in others before they see it in themselves. She lifts up women and colleagues—one conversation, one matter assignment, one presentation at a time. Ms. Speights is an influencer and connector of people who is driven to improve the legal professional for women and the world around us for everyone.

Ms. Speights is sought out by executives and boards for her proficiency and experience in not only investigating workplace misconduct claims, but also examining the very culture of the companies themselves. In the last few years, Ms. Speights’s practice has gained greater prominence for her pioneering role in leading high‐profile internal investigations for companies as they navigate the new workplace paradigm. Ms. Speights and her team were behind many of the investigations of the organizations whose #MeToo stories have made headlines in recent years, including, among many others, National Public Radio, and the Humane Society of he U.S. As a result of this work, in 2018, the American Lawyer named Ms. Speights The American Lawyer’s Attorney of the Year. Last year MS. Speights represented PBS in the highly publicized lawsuit filed by former talk show host Tavis Smiley, whose contract was terminated by PBS because of allegations of sexual harassment. After a three-week jury trial, the jury returned a defense verdict and found in favor of PBS on its counterclaim against the Smiley entities. The Court awarded $2.5 million to PBS on its counterclaim.

As the global leader of Morgan Lewis’s top‐ranked 300‐lawyer labor and employment practice since 2016, Ms. Speights has seized opportunities to advance diversity and inclusion in the practice and create opportunities for diverse and female lawyers. During her tenure as practice leader, 63% of associates promoted to partner have been women or diverse lawyers. She has recruited diverse and/or female partners to the practice, including former EEOC Commissioner Chai Feldblum; Sharon Masling, former chief of staff and chief counsel to Commissioner Feldblum; Susan Harthill, formerly one of the most senior lawyers at the Department of Labor; and numerous leading female partners from other firms. To support the development of diverse talent, Ms. Speights has implemented new processes for assignment of work and selection of pitch teams, ensuring that diverse lawyers receive impactful assignments and opportunities.

Throughout her career ascent, Ms. Speights has never forgotten the challenges she faced as a child and has always truly understood her minority status. Since joining Morgan Lewis in 1984, she has logged countless pro bono hours advocating on behalf of organizations with legal needs in Washington, DC and for minority families and children to ensure they have the opportunities she fought for as a young student. A highly respected figure within the firm and in the Washington, DC legal community, Ms. Speights has held numerous leadership positions and has received copious recognition of her work and her public service.

In the aftermath of the murder of George Floyd, Ms. Speights, along with Morgan Lewis Chair Jami McKeon, spearheaded Morgan Lewis’s Mobilizing for Equality Task Force. The task force involves 14 working groups focused on developing substantive projects related to racial justice, such as improving access to education and opportunity, developing and implementing safe policing practices, securing voting rights, and leading legislative reform. The initiative is planned as a long‐term endeavor by Morgan Lewis to put its resources behind helping to solve some of the most intransigent problems facing the United States and the world.